Laser-ultrasonics is a non-contact, non-destructive evaluation method that combines the accuracy of ultrasonic technique (UT) with the flexibility of optical systems.

Talk to an expert

What is laser UT?

In laser-ultrasonics, a short laser light pulse, called the generation laser, is absorbed over a small volume on the surface of the target material. The absorbed optical energy triggers a high-frequency sound pulse within the material, called the ultrasonic probing pulse.

The surface motion caused by ultrasound is then encoded in the backscattered light. Using an optical interferometric process, the surface motion is extracted from the collected light, producing a signal identical to conventional UT, but without any contact with the target. UT waveform analysis methods are then used directly on the laser-UT waveforms to detect defects, characterize material or obtain dimensional measurements. Laser-ultrasonics can be used in environments where it was previously not possible with conventional UT, expanding the range of UT applications.

The basis of laser-generated ultrasound is to transfer a large amount of energy within a small volume of material, fast enough that this material does not have the time to properly react or dissipate that energy. The reaction to the stored energy results in a mechanical detonation that launches acoustic waves in the material itself.

The energy needs to be deposited very rapidly  to achieve such conditions. That’s why very short-time laser pulses are used, from nanosecond down to femtosecond lasers, depending on the application. The most commonly used lasers in the market are glass-based solid state Q-Switch sources with impulses between 1 to 10 nanosecond and energy ranging from a few milliJoules to a few Joules. 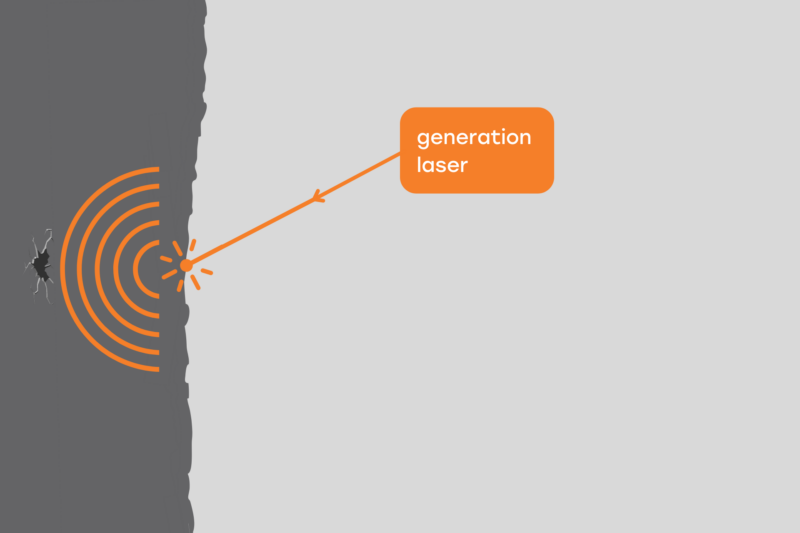 Detecting an ultrasound, laser-based or not, is always about detecting minute surface displacements caused by ultrasonic echos.

In laser-UT, these minute movements are measured by a second laser focussed where ultrasonic echoes are expected. Because of the well-known Doppler effect, the backscattered light from a nanometer-scale moving surface will carry a frequency alteration that is proportional to the surface’s velocity.  The surface displacement is then encoded in the light collected from the target. 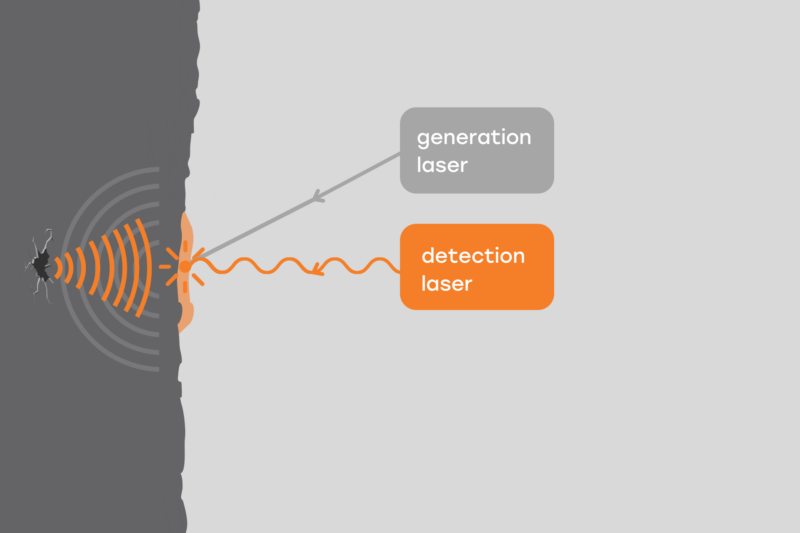 Coded light collected from the inspected material is then routed, using optical fibres, to a laser interferometer. The interferometer acts as a demodulator, converting the light frequency modulations into electrical amplitude modulations, just like a car radio does with analog FM radio channels.

At Tecnar, our interferometer for laser-ultrasonic detection is based on holographic technologies in a photo-refractive crystal. Such units have the advantages of being rugged, maintenance-free and sensitive to ultrasound content.

Learn more about the TWM 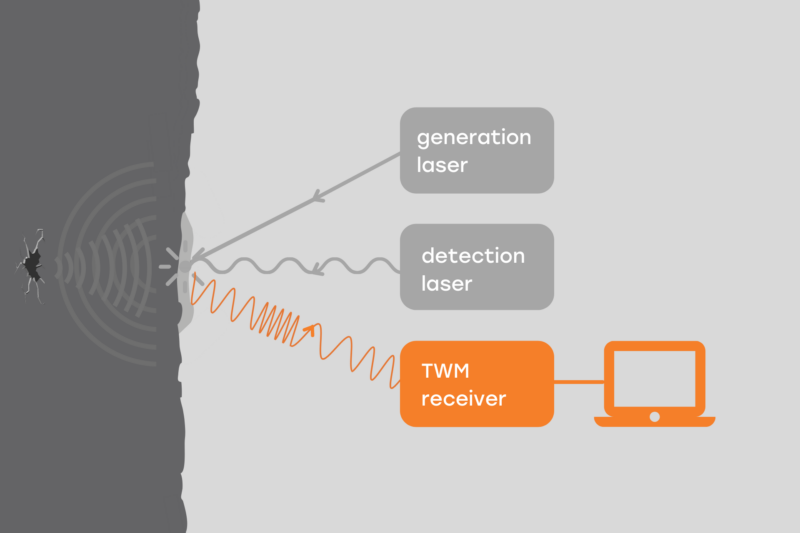 Once the ultrasound is digitized into a computer, a software analyzes the signal to attribute a specific desired characteristic for the application. That characteristic is attached to a position on the tested part.

Characteristics can be geometrical, like the overall thickness of a part. It can be about the finding porosities inside a given volume, using advanced processing like Synthetic Aperture Focusing Techniques (SAFT). And it can be about measuring transformations in the frequency domain, like the frequency dependent attenuation caused by grain structure. Tecnar’s software is built to perform all these different processing approaches.

Leave your details so our experts can contact you. Our team will answer all your questions and suggest the best solution for your needs.

This website uses cookies to improve your experience while you navigate through the website. Out of these, the cookies that are categorized as necessary are stored on your browser as they are essential for the working of basic functionalities of the website. We also use third-party cookies that help us analyze and understand how you use this website. These cookies will be stored in your browser only with your consent. You also have the option to opt-out of these cookies. But opting out of some of these cookies may affect your browsing experience.
Necessary Always Enabled
Necessary cookies are absolutely essential for the website to function properly. This category only includes cookies that ensures basic functionalities and security features of the website. These cookies do not store any personal information.
Non-necessary
Any cookies that may not be particularly necessary for the website to function and is used specifically to collect user personal data via analytics, ads, other embedded contents are termed as non-necessary cookies. It is mandatory to procure user consent prior to running these cookies on your website.
SAVE & ACCEPT